Inside your water-cooled Porsche M96 engine, you have a crankshaft that drives the connecting rods/pistons like everything else. The Intermediate Shaft is a tubular shaped part that resides parallel to and just below the crankshaft, which drives the IMS via sprockets and a double-row chain. It's purpose: driving the camshafts and the oil pump. Six-Cylinder Porsche Air-Cooled Engines(see photo below) have had intermediate shafts since their birth, but none quite like this. The bearing at the sprocket-end of the intermediate shaft rides upon is a sealed steel ball bearing. Over time the oil bath causes the seal to shrink allowing the grease inside the bearing to leak out causing heat and friction to build up leading to bearing failure. That's it. The IMS bearing fails and when it does, causes severe damage to your engine. In some cases, this damage is irreparable. This isn't a case of IF- it's a case of WHEN. What's worse, there's nothing you can do to stop this bearing from failing- but you can replace it before this happens. 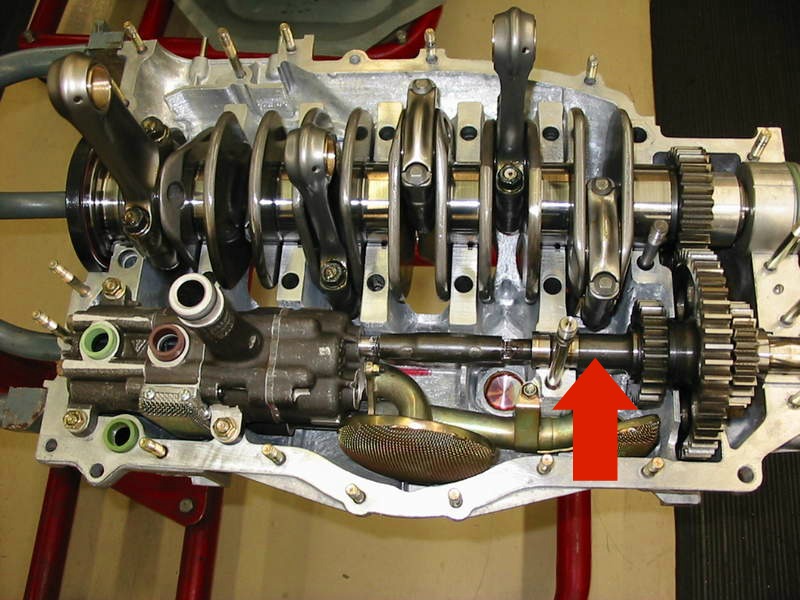 Once half of the engine case has been removed here in this photo which shows the IMS sprocket with chain. The IMS Bearing rides in the center of this sprocket. The flange is what is used to locate and secure the bearing assembly to the engine case. 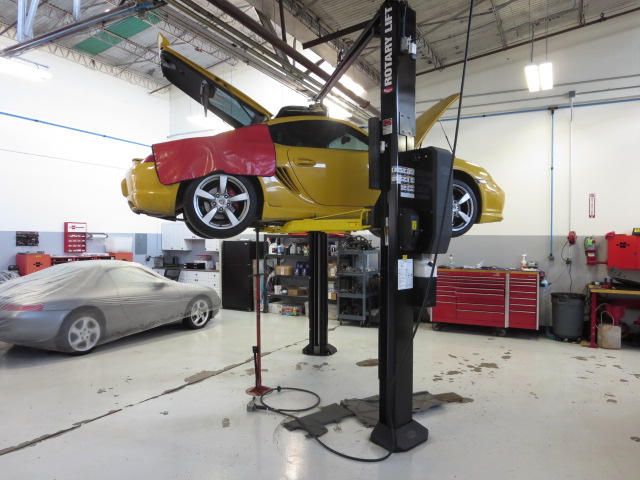 The first step in the process is the inspection. We lift the vehicle, run the engine and listen for abnormal noises with a stethoscope. Second, we drain the engine oil through a filter that will seperate particles if present. The engine oil filter is then cut open and both filters are inspected for particulate. If none are found, we proceed with the retrofit and remove the transmission. 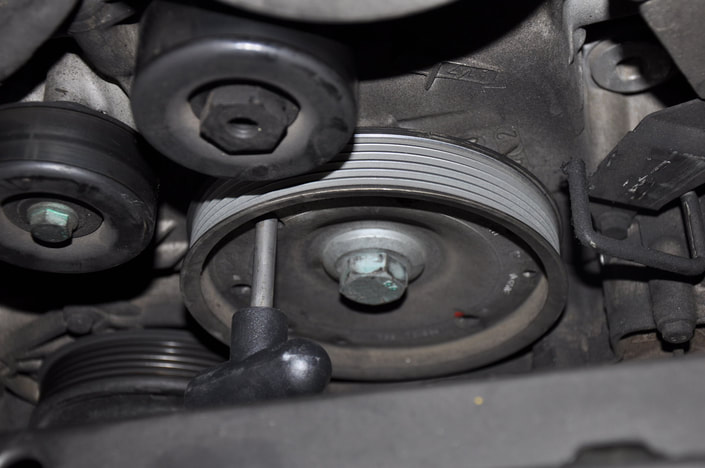 Using special keys, we lock the crankshaft and the camshafts to prevent movement during the repair. The chain tensioners are then removed to grant movement needed to replace the bearing. 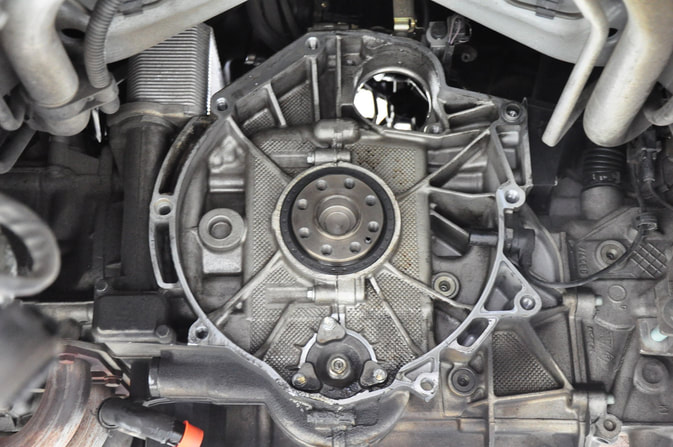 This is a closeup of the flywheel side of the engine. The tranmission and clutch assembly have been removed. The circular component in the center is the crankshaft.  Note the three-bolt IMS flange just below it. This particular engine has a faulty crankshaft seal which will be replaced during this repair. This is a common find. 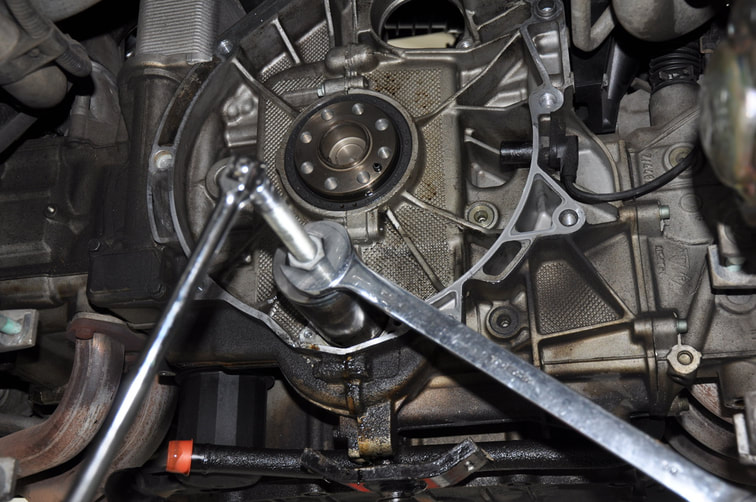 This image shows the IMS bearing being removed with special tooling. Removal of the IMS causes oil to spill from the shaft. We save the cleanup until this is finished dripping. 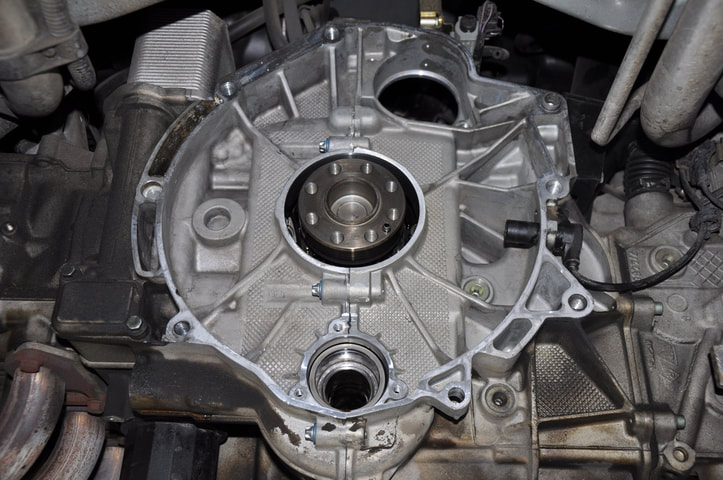 This image shows the engine after the IMS and the crankshaft seal have been removed and after excess oil and dirt have been cleaned away. The engine is now ready for the fitment of the new crank seal, IMS bearing and flange.

The new crankshaft seal is installed using the Porsche installation tool. This is the only way to ensure the new seal will seat properly. 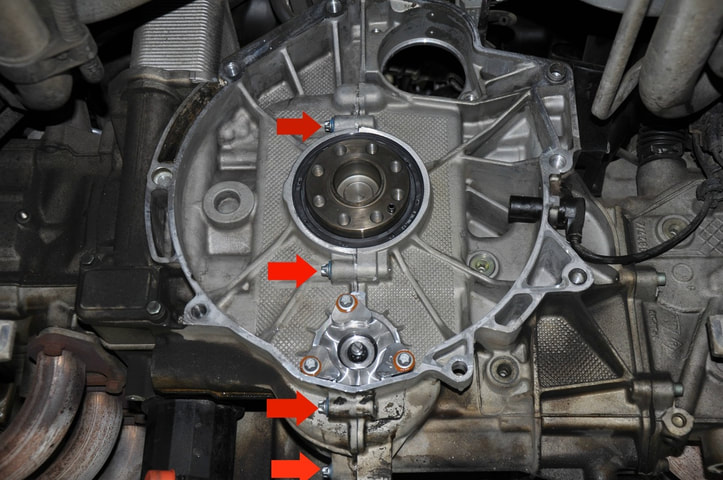 This image shows the new IMS bearing and flange installed. It is standard practice for us to replace the four case bolts(see red arrows) that have special sealing properties to help prevent/eliminate oil leaks. This concludes the IMS Bearing retrofit!